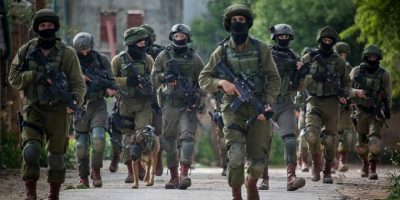 The West Bank situation is becoming increasingly complicated amid the coronavirus pandemic and territorial disputes between Palestinians and Israelis. At first, the Palestinian Authority and Israel showed signs of cooperation in combating the pandemic. A few weeks ago, joint measures were announced between both sides to contain the epidemic of the new coronavirus in the region. The measures include distribution of cleaning and personal hygiene materials, in addition to virus testing kits and medical equipment.

On the part of Tel Aviv, the total closure of the West Bank was promoted, allowing, however, access for Palestinian workers involved in the construction and agriculture sectors to the Jewish state, which is why the proposal was well accepted by Ramallah. On the part of the Palestinians, the West Bank has also been blocked, but only partially and for two weeks, since last Sunday (March 22), in addition to the implementation of a series of control and quarantine measures.

“We have very strong round-the-clock coordination with the Israeli side to prevent the coronavirus from spreading (…) At the same time, Israel continues to operate in the Palestinian Territories as if there is no coronavirus crisis (…) They [Israeli forces] continue their raids across the West Bank, arresting people and confiscating lands, and that harms the existing coordination between the PA and Israel putting an additional burden on the Palestinian Authority,” said the spokesman.

Apparently, Israel pretends to collaborate with Palestine to stop the pandemic, when, in fact, it freely promotes its military maneuvers in the region, which go unnoticed by the mainstream media, strongly focused on covering the viral tragedy. In addition, Tel Aviv’s own collaboration to control COVID-19 in the region seems extremely limited. The blocking measures made it impossible, for example, for doctors from the “Physicians for Human Rights” (an Israeli NGO that serves Palestinians free of charge) to move alongside the West Bank, clearly hampering medical care in the region.

Mention should also be made of the fact that Israel, not Palestine, is the major focus of infections by the new coronavirus in the region. Israel has already more than 1.000 officially reported cases of the disease, in addition to one death, and several suspicions. In contrast, Palestine has around 60 infected people. It is clear from these data that the most stringent containment measures should come exclusively from Ramallah, since the Israeli military presence in the region itself poses a serious risk to Palestinian public health.

According to a survey by the Truman Institute for Peace at the Hebrew University of Jerusalem, 63% of Israelis say Israel must help Palestinians during the coronavirus crisis. Vered Vinitsky-Serousse, president of the Institute, said that

“the majority of Israelis believe that, when necessary, the government should devise preventive measures to help Palestinians during the Covid-19 epidemic.”

The big problem, however, is how these joint maneuvers are conducted. Perhaps the first step to be taken in establishing joint measures is the definitive and immediate end to military incursions in the region, which constantly bring insecurity and terror to the Palestinian people.

The situation of tensions in the region must still be read in the context of the so-called “Deal of the Century”, the “peace” proposal for the conflict between Israelis and Palestinians announced by American President Donald Trump. The “agreement” was celebrated unilaterally by the Washigton-Tel Aviv axis, with no participation of Palestinians, which is why it was rejected by the Palestinian Authority and the Arab League. The document foresaw the annexation of Israeli settlements in the West Bank, leaving around 70% of the region under Palestinian rule – a figure much lower than that proposed by all previous attempts to resolve the conflict. Everything indicates that Israel will not stop its attempts to occupy that territory as much as possible.

It is in this context that the “joint” actions between Israelis and Palestinians must be analyzed with skepticism and suspicion. Are these pandemic containment measures really good, even when behind them the Israeli army expands its occupation in the region with increasingly aggressive incursions? Also, to what extent does Palestine benefit from the help of these joint actions when Israel has an absurdly greater number of infected people? Would Israel be able to help the Palestinians? Or would that aid be a mask for such military incursions? All of these are valid questions.

It is also worth remembering that a few weeks ago, at the end of February, Israel announced the construction of more than 2.000 new settlements in Palestinian territories – and on the same occasion, Netanyahu authorized the construction of other 7.000 units in the East Jerusalem region. These data mean that Israel’s aggressiveness against the Palestinians was increasing recently. Did this aggression really disappear from Tel Aviv’s plans in the face of a “commotion” with public health in Palestine (which is much better than the situation in Israel)? Perhaps, the mainstream media and Human Rights observers should divide their attention between the coronavirus and the conflict in Palestine, before more serious clashes erupt.

Note to readers: please click the share buttons above or below. Forward this article to your email lists. Crosspost on your blog site, internet forums. etc.

This article was originally published on InfoBrics.

Lucas Leiroz is a research fellow in international law at the Federal University of Rio de Janeiro.

Featured image is from InfoBrics

Dr. Eric Karlstrom, a targeted citizen has a huge website about 911- 911nwo.com – which he’s been working on for many years. One of the topics include writings on the new World order, Electronic Weapons, Mind Control and Cults Cults and his videos/audios.

This video – showing the occult significance of 9/11- is very important- it talks about the bringing in of the beast police state system…. Aka gang stalking.

This is what the Egyptians wrote of — what Adam and Eve witnessed during another Planet X flyover/passing of the planets, the IMMARU, NIBIRU system.

911 Was A  Ritual Sacrifice for World Mind Control…

9/11 was an occult Mega-Ritual. The numbers of the 4 flights were chosen specifically for their occult significance. Can we use this occult script to predict the next false flag? (Hint: don’t go to Phoenix this Xmas!) from conspiracy

In this shocking exposé, investigative researcher and author S. K. Bain explores the inconsistencies, coincidences, and historical precedents of the events of September 11, 2001, and reconstructs an occult-driven script for a Global Luciferian MegaRitual. Bain argues forcefully that the framework for the entire event was a psychological warfare campaign built upon a deadly foundation of black magick and high technology. The book details a view of the sinister nature of the defining event of the 21st century and opens a window into the vast scope of the machinery of oppression that the author asserts has been constructed around us. —

The author: S. K. Bain is the former art director of Weekly Standard magazine and Oxford American magazine. He recently helped author portions of U.S. Public Law 111-11, an act that designates certain land as components of the National Wilderness Preservation System. He lives in Blue Mountain, Mississippi. Peter Levenda is the author of Sinister Forces and Unholy Alliance: A History of Nazi Involvement with the Occult. He has appeared in numerous documentaries for the History Channel and the Discovery Channel, as well as in TNT’s documentary The Faces of Evil. He has also appeared on Coast-to-Coast with George Noory and Ian Punnett. He lives in Miami.

The Kev Baker Show interviews expert on targeting Elana Freeland–a must hear. Consider sharing to awaken others… we’re all poisoned from Chemtrails with a matrix all around us from all the frequencies and its about to get worse with 5G. Humanity being pulsed with complacence frequencies, something I’ve become aware of watching others in my area of northwestern Maryland. In my travels, from Maryland, Virginia, and down into Florida and North Carolina, I’ve seen this from all walks of life and they’re being taken over, completely. You just can’t make these kind of things up — Lissa

— I’m one of those suffering after willful spraying and/or activating a weapon on me of synthetic biology holding me down like a body-snatching, spraying me 247 with their SKYNET artifical intelligence via DARPA and HAARP & Space Fence mechanism (lockdown of Planet Earth), direct energy weapons, and matrix like attacks.. this is after they robbed me of justice, covered-up the horrific killing of my husband for JPMORGAN/Rothschild..  and tried to body-snatch to a military base at 6 weeks of age, thwarted by my Grandparents, whom raised me from birth, both died horrific deaths by the US NAZI military industrial complex, same ones who assassinated JFK and his brother, and MLK, and Lennon and many many others. — Lissa